Strap yourselves down, it’s my biggest load of waffle ever…. There’s been quite a bit of activity over on the HomeEasy pages on Arduino.cc, and several people have mailed me to say that they have made progress with various HomeEasy related Arduino Projects. Hi to David Edmunson, for posting his […]

Strap yourselves down, it’s my biggest load of waffle ever….

There’s been quite a bit of activity over on the HomeEasy pages on Arduino.cc, and several people have mailed me to say that they have made progress with various HomeEasy related Arduino Projects. 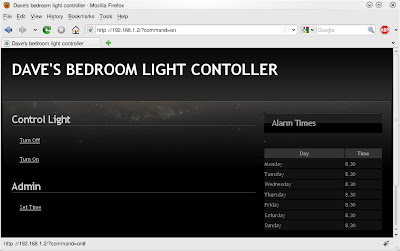 Hi to David Edmunson, for posting his latest project for an alarm clock, (above) – nicely done – like the interface, clearly, unlike me – you can code in CSS (!) .

What am I up to?, and why have I been neglecting my blog?

Well, the day job is getting in the way again, but I do have *three* projects on the go that I will post updates for shortly – here’s where I’m at:

This is a really easy to build Arduino + TX + RX circuit that just does a dumb repeater job within our house – this is great as it now means that our BBSB messages get repeated all over the house and none of our devices miss a beat (mostly) – I will probably also extend this to repeat HomeEasy messages as well, as we now have a mixture of devices.

This is all built, and working just fine – I discovered that a couple of 15cm lengths of wire make far better antennas then expensive 433mhz stubby antennas purchased because they looked cool.

A couple of years ago, I came in from work one afternoon, only to find it was ‘Raining’ in our downstairs loo! – Our shower pump in the bathroom above had sprung a minor leak, and flooded the upstairs bathroom. Ever since then we’ve had a nifty little Velleman ‘Water Alarm’ wired up to a sensor under the bath where all the plumbing bits are. This works great, and makes a rude noise if the area under there gets wet. 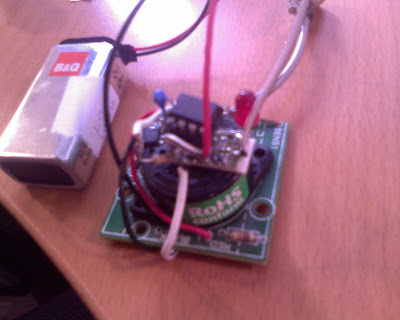 This isnt very 2009 though, so it was high time it was empowered a bit. – a peeping alarm in an empty house is no use to anyone!

This little project is based around the PIC 12F675 microcontroller – which is less than £2 at Maplins, I ported the BBSB transmit code that works on the Arduino into the little PIC, resulting in a little ‘module’ or ‘bug’ that can send a BBSB ON or OFF code when an input changes status (high-low, low-high etc). I also built a little battery monitor into it so that it sends a signal every few days just to say ‘Hi’ to the house and confirm its still working! – I managed after a bit of fiddling to build this up with NO PCB, as the 8 pin chip makes a reasonable cowboy construction bed to solder the other components to …yee-ha.

I dont have the PDF write up for this one done yet, but will post it with code etc as soon as I get around to it. – we also have a small battery drain problem currently Houston – or it has crashed, because it stopped calling in about a week after being installed. ahem! – so perhaps not quite ready for the primetime!

This is more a not-even-half-baked-idea but appears to be a go-er.

We’ve had a Wireless Alarm for some time in our house, which works really well – I do however miss two things – 1) being able to arm/disarm it via the internet, and 2) being able to catch events from all the system’s detectors around our house too and act on them. 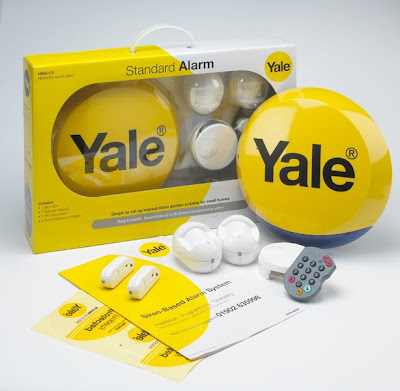 The Yale protocol is not published anywhere, and so far my attempts to reverse engineer it have failed I’m assuming it’s a code-rolling type system (like a car key fob, so unlikely to be easy to decode) – (I think Yale would also be happy about this too), but what is possible is to interface to the Alarm system via two of it’s most commonly available components – a) the Keyfob Remote, and b) the Bell-box – both of which can be learned into the alarm system (even a 2nd bell-box) – The Bell Box itself can actually function as a stand-alone alarm controller on the cheaper Yale system , so in itself it’s packed with circuitry and certainly knows if the alarm is ON or OFF.

I bought an extra bell-box from Ebay and learned it to our system, I binned the housing we can re-house it in a smaller box with the ‘duino later), amputated the deafening siren (not needed!) and shorted the tamper switch closed (no thanks) – I was left with a little board that I could connect to the Arduino.

My prototype Arduino project monitors the status of the Alarm currently – this is possible because the 3 LED’s on the Yale Alarm box have a ‘flash’ sequence that is different for arming, and dis-arming – by responding to these two different combinations of events, you can tell if the alarm was just armed, or disarmed – I will probably just send a HE or BBSB message via the Arduino when this happens, which will allow the rest of the house to respond to Arm/Disarm events – primarily enabling security schedules , and, more importantly, turning down the heating! — This isnt really all that smart, as clearly if the Arduino powers-up it wont know whether it’s On, or Off – some more probing around the circuit board for the bell-box unit may reveal more. There is definatley a pin somewhere for ‘Siren going off’ as well, so this should be not too hard to track down either.

As you might have worked out by now, the easy way to arm/disarm the Alarm using the Arduino interface is to connect some output pins from the trusty ‘duino across the keyfob buttons for arm/disarm – again very nasty – but also very secure – provided you shut the remote in a box somewhere the entire unit can remain wireless with the Arduino onboard also – especially if you are using 433mhz messages to HomeEasy/BBSB when events occur. – I wouldnt recommend allowing the insecure protocols like this to actually ‘do’ stuff like disarm the alarm however, for obvious reasons – I will probably do this ‘some other way’ using cabling inside the house.

So – unfinished masterpiece currently, but perhaps more progress over Xmas on that one – if you have any ideas on this one, or circuit diagrams(!!!!) let me know – of if you just want to hack-along on this project, I’ll set up a wiki or something.

Thats it for now.