For Abdulrahman al-Shantti, becoming an internet sensation feels “really good” because it allows him to spread his message of what growing up in the Gaza Strip is like. “I want to tell the outside world how the Palestinians live in Gaza and how we as children are supposed to live […]

For Abdulrahman al-Shantti, becoming an internet sensation feels “really good” because it allows him to spread his message of what growing up in the Gaza Strip is like.

“I want to tell the outside world how the Palestinians live in Gaza and how we as children are supposed to live like normal people but don’t,” he told Al Jazeera.

The 11-year-old rapper shot to fame earlier this month when one of his cover songs on his Instagram page went viral and, at the time of writing, has earned him more than 92,000 followers.

The video, which features a song by Palestinian rapper Waheeb Nasan, shows Abdulrahman standing in front of his classmates, effortlessly rapping in American-accented English without missing a beat.

“First of all, this is our country, let me tell you how it goes,” he raps. “We want peace and we want love/people pray and teach who don’t.”

The song, which itself is a cover version of Wiz Khalifa’s See You Again, netted him praise from famous music artists around the world, from US artist DJ Khaled to Canadian signer Masari to the UK’s Akala and Lowkey.

Abdulrahman, who goes by the stage name MCA, first took a liking to hip-hop music when he was nine years old.

“I started rapping for fun at first,” he explained. “I memorised Eminem’s song I’m Not Afraid and that’s when I found out I’m good at rapping. Ever since then I started to write my own original songs and memorised covers for famous rappers.”

When asked about his favourite artists, he gushed with enthusiasm.

“Oh man, I have so many!” he said. “Eminem, Tupac, Mike Shinoda. I was searching for rap songs on YouTube and came across Changes by Tupac and I really liked it. So I checked out more songs from him and listened to Dear Mama, The Rose and really liked his style.” 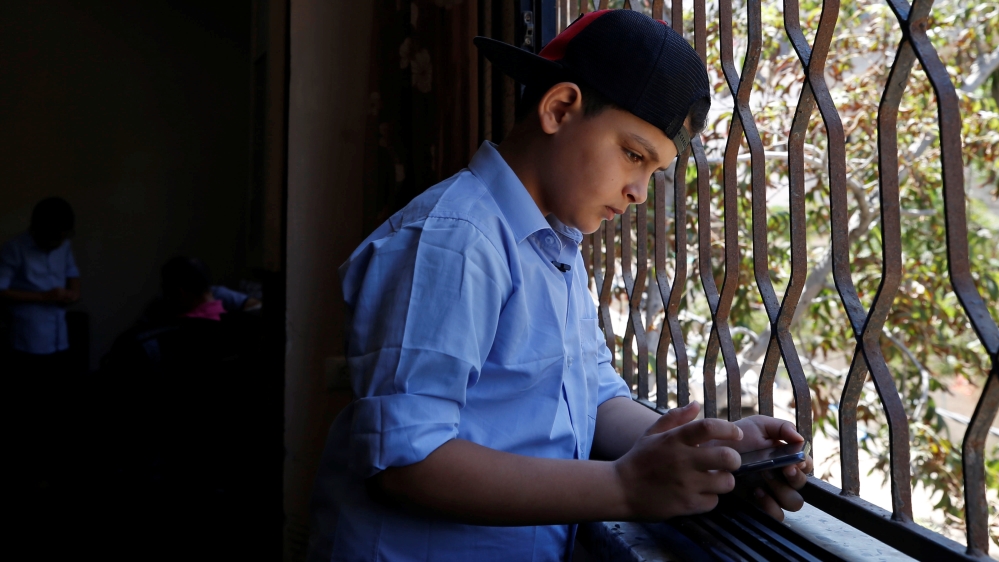 His father Saleh says Abdulrahman, who is also a big NBA fan, is completely self-taught.

“He learned everything from the internet on the phone,” he said. “He was born and raised in Gaza, and has never attended a language institute. He keeps a schedule where he practices new songs, day and night.

“All of this talent is from his determination and hard work and practice,” he added.

Hip-hop as a ‘voice of the people’

“I actually did a live Instagram interview with Abdul before he went viral,” he told Al Jazeera.

“It’s really amazing to see the love MCA has received so far and it’s crazy to believe that just 10 days ago he had 800 followers and now he’s crossed the 90K number.”

Saleh, who takes videos of his son rapping with his mobile phone, said he is proud of Abdulrahman, whose original lyrics talk about experiencing three Israeli offensives during his 11 years on Earth.

“His own songs talk about where he lives and the conditions of the Gaza Strip from his own perspective,” he said. “Through his videos, he wants to show the world places in Gaza.”

In one of his original songs, Abdelrahman raps about life in Gaza, which he has only known under a blockade that is older than he is.

“Since the first day of my life I have already seen three wars/And it won’t take very long for me to see another one,” he raps. “On the beach of Gaza – sands, fresh air and sea/It’s the only opportunity for the people to feel free.”

Big Hass said it was not surprising at all that such a prodigious talent chose hip-hop as a medium to convey his message.

“I find it refreshing that MCA found hip-hop to express his ideas and talent,” he said. “Hip-hop has always been the voice of the people.”

The genre has spread across the Arab world, he continued, starting from the North African countries before making its way to the Levant and the Gulf states.

“I am loving the diversity of the Arab rappers,” he said. “I’ve been fortunate to cover, support, and document Arabic hip-hop since 2007 and it’s been amazing to watch it grow.”

Palestinian hip-hop groups – such as DAM and the now-defunct Ramallah Underground – paved the way for other artists to flourish or have short-lived rap careers.

From Gaza, rappers such as the duo Revolution Makers – all use Arabic in their lyrics, but Abdulrahman wants to focus on rapping in English for now as it offers a wider audience and more opportunities, according to his father.

“That is not to say that he will not rap in Arabic, just maybe in the future when he has mastered English,” Saleh added.

He said he wants to continue rapping and is working on an album.

“I have maybe five songs so far,” he said. “In the future, I want to go to the United States and meet my musical influences and visit studios. I also want to learn how to be a better songwriter.”