“PCGS is the industry leader in fighting counterfeiting,” says PCGS President Brett Charville. “PCGS has always been ahead of the curve in the numismatic industry regarding technology, and the inclusion of NFC technology is just the latest way we can stay one step ahead of counterfeiters and ensure collectors and dealers that their PCGS coins and banknotes are exactly what the label promises.”

PCGS, which in the spring became the first company in the numismatic industry to utilize NFC technology and remains the sole third-party grading service offering this technology, enables collectors to tap their holders with a phone, launching certification information right on the device’s screen. This data ensure collectors, dealers, customers, and others that the coin or bank note stated on the label is indeed the piece inside the holder. The NFC technology has become necessary in a day and age when counterfeit coins and bank notes are more sophisticated than ever before. To combat this, PCGS partnered with HID Global to insert NFC technology in all holders, including PCGS Banknote holders, to provide peace of mind that collectibles within PCGS holders are 100 percent authentic and are in the grade or condition that is stated on the label.

NFC inserts require no new hardware or any software updates. They are solid-state and have no moving parts, do not contain any sort of battery, and will be encased in the same industry-leading holder that keeps your coins and bank notes safe. Therefore, without the risk of exposure to the elements and damage, expect these inserts to last beyond the general expected lifespan of 100,000+ scans and 40+ years. That means a collector scanning the NFC insert in any given PCGS holder can do so worry-free. NFC technology works by exchanging encrypted technology between itself and another NFC-enabled device, such as a smartphone.

“This technology, similar to the chip found in the credit cards in your wallet, is the single biggest leap forward for third-party grading since its inception. While it may affect our pocketbook down the line, I would hope that every other third-party grading service in the industry considers integrating similar technology into their product lines as well. It’s simply that important for the hobby as a whole,” urges Charville.

Those using an Android or iPhone XS (or newer) already have everything they need to benefit from PCGS’s NFC technology upgrade. All they need to do is put those devices close to the chip, opening a web browser on the phone with information about the slab and coin or banknote within. The PCGS Cert Verification will automatically load on phones that have that app installed; the app can be installed for free by visiting https://www.pcgs.com/apps.

Tue Oct 6 , 2020
When Ypsilanti resident and community activist Gail Summerhill hears a politician tell constituents, “Register and go vote,” she says it makes her feel like cussing.   “It’s like a knife every time I hear it. All you ever hear is ‘register and go vote,’ but you’re assuming that a person’s […] 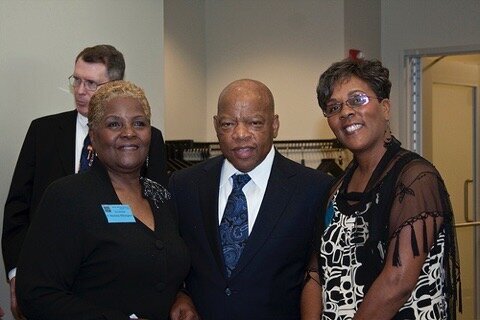