The first atomic bomb, The Gadget, 1945. The nuclear test of the first detonation of a nuclear weapon was codenamed Trinity, but the atomic device was nicknamed The Gadget. The date of the Trinity test is usually considered to be the beginning of the Atomic Age. The gadget was an […] 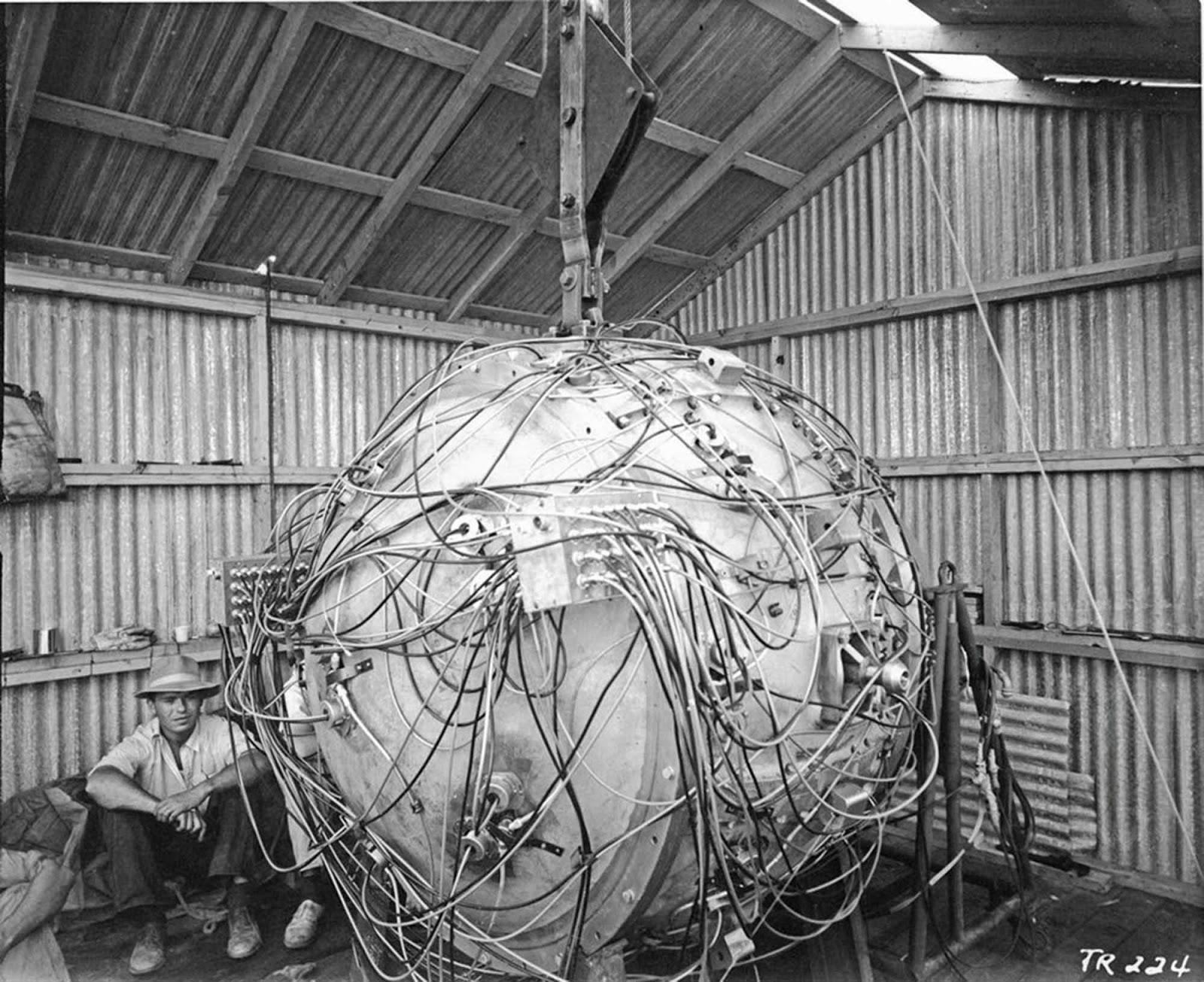 The nuclear test of the first detonation of a nuclear weapon was codenamed Trinity, but the atomic device was nicknamed The Gadget. The date of the Trinity test is usually considered to be the beginning of the Atomic Age. The gadget was an implosion-type plutonium device, similar in design to the Fat Man bomb used three weeks later in the atomic bombing of Nagasaki, Japan.

The term “Gadget” was a laboratory euphemism for the bomb, from which the laboratory’s weapon physics division, “G Division”, took its name in August 1944. At that time it did not refer specifically to the Trinity Test device as it had yet to be developed, but once it was, it became the laboratory code name. The Trinity Gadget was officially a Y-1561 device, as was the Fat Man used a few weeks later in the bombing of Nagasaki. The two were very similar, with only minor differences, the most obvious being the absence of fuzing and the external ballistic casing. The bombs were still under development, and small changes continued to be made to the Fat Man design.

The Gadget was an implosion device, which means the plutonium core is surrounded by many small explosives, these compress the plutonium and bring it closer to the point of causing it to go super critical. All those wires are attached to different explosives which burn at different frequencies. The trick of the 20 explosions is that they push the pieces of uranium (or plutonium) together to a ball with an over-critical mass, which explodes. They have to time this extremely accurately, however. Microseconds differences will make the ball lopsided and less effective. Part of the solution is to make each and every cable the same length which is why the Gadget looks like a ball of wires.

Assembly of the nuclear capsule began on 13 July 1945 at the McDonald Ranch House, where the master bedroom had been turned into a clean room. The polonium-beryllium “Urchin” initiator was assembled, and Louis Slotin placed it inside the two hemispheres of the plutonium core. Cyril Smith then placed the core in the uranium tamper plug, or “slug”. Air gaps were filled with 0.5-mil (0.013 mm) gold foil, and the two halves of the plug were held together with uranium washers and screws which fit smoothly into the domed ends of the plug. The completed capsule was then driven to the base of the tower. 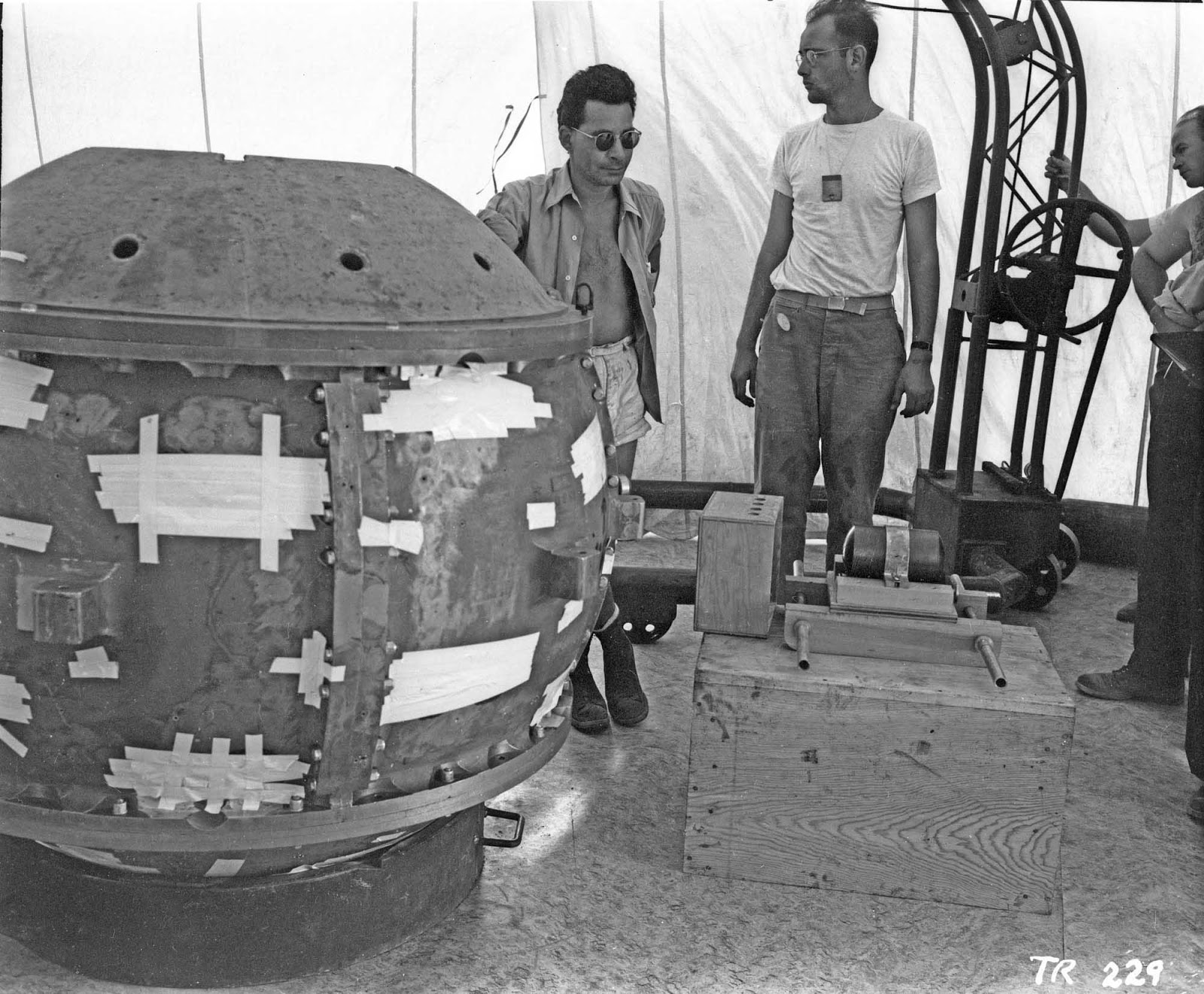 Louis Slotin and Herbert Lehr with the Gadget prior to insertion of the tamper plug (visible in front of Lehr’s left knee).

For the test, the gadget was lifted to the top of a 100-foot (30 m) bomb tower. It was feared by some that the Trinity test might “ignite” the earth’s atmosphere, eliminating all life on the planet, although calculations had determined this was unlikely even for devices “which greatly exceed the bombs now under consideration”. Less wild estimates thought that New Mexico would be incinerated. Calculations showed that the yield of the device would be between zero (if it did not work) or 20 kilotons of TNT. In the aftermath of the test, it appeared to have been a blast equivalent to 18 kilotons of TNT.

At 05:29:21 (July 16, 1945) local time, the device exploded. It left a crater of radioactive glass in the desert 10 feet (3 m) deep and 1,100 feet (340 m) wide. At the time of detonation, the surrounding mountains were illuminated “brighter than daytime” for one to two seconds, and the heat was reported as “being as hot as an oven” at the base camp. The observed colors of the illumination ranged from purple to green and eventually to white.

The roar of the shock wave took 40 seconds to reach the observers. The shock wave was felt over 100 miles (160 km) away, and the mushroom cloud reached 7.5 miles (12.1 km) in height. After the initial euphoria of witnessing the explosion had passed, test director Kenneth Bainbridge commented to Los Alamos director J. Robert Oppenheimer: “Now we are all sons of bitches”. Oppenheimer later stated that, while watching the test, he was reminded of a line from the Bhagavad Gita, a Hindu scripture: “Now I am become Death, the destroyer of worlds”.

Sat Apr 11 , 2020
It’s easy for technology to turn into digital shackles that keep us tied to work by throwing at us a blizzard of popups, chimes, dings, and other annoyances. But, with a little bit of thought and planning, it’s possible to get technology to work for us and allow us to […]