[HANDS-ON] My brother-in-law acquired the Yale Look Door Viewer yesterday in an attempt to make his home smarter and as well monitor what is happening outside his door.

Yale Look Door Viewer is essentially a door viewer on steroids. Replacing the traditional door viewer, the device allows you to video chat to whoever is at the door via the Yale Look App with a 720p camera and live motion detection at your door providing snapshots/videos.

It is an intriguing gadget because it seems to be a cross between a CCTV camera and a door walkie talkie you see at some condominium and on top of it, it offers video chat.

We are eager to find out if the hole meets the minimum requirement of 14mm diameter. Luckily it does, and FYI, it’s an HDB (built in 2015) door in this case. The next step is easier, the put the camera through from the front and tighten it to the metal plate holder with 2 screws.

Physical connection completed, it’s time setting up the door viewer to the Internet. Step number 1, the Yale Look Door Viewer is in WiFi-direct mode, your phone is supposed to connect to it directly and so your router information can be entered.

However, we tried it several times, Yale Look App setup wizard could not automatically connect, we have to sort of connecting it manually by looking for a Wifi connection named “DDV-XXX” and apply the Yale default password, 12345678.

I suspect this could pose trouble for more than a few because the App does not say the device is Wifi-Direct mode and Wifi-direct mode might be a concept not everyone might know instantaneously.

Thereafter onwards, the setup wizard poses no more problems though it took like more than 5 minutes or so for the wizard to complete.

Finally, when everything is done, we await the moment of truth when we press the doorbell (I forgot to take a picture of the front part camera with the doorbell button on it). Viola! The moment the doorbell is pressed, my Brother-in-law got a notification on his phone.

Opening up the notification, the app will ask if you would like to pick up the doorbell and speak with the visitor.

However, generally, this process isn’t as good as it sounds. First, the doorbell button is not noticeable, it is more likely the visitor will press a regular doorbell if there is one. Also if the door is looking out to the sky, the backlight affect the images taken, faces of the visitor might be darker than you expect. Finally, the times when the video streaming did connect, the images are rather choppy.

Security is other concern too because the door viewer is connected to the net, maybe not be much of a big deal since the camera is facing out of the main door.

All in all, Yale Look Door Viewer is does what it claims, you should be able to get good updates on what’s happening outside your door and remote communication with the person at your door. The latter is somewhat not as smooth as I would have like and I get a feeling it is something that a software update will take care of. That said, I fancy the door viewer more like a novelty rather than something is that is actually going to be productive unless you are really interested in what’s happening behind your closed door. 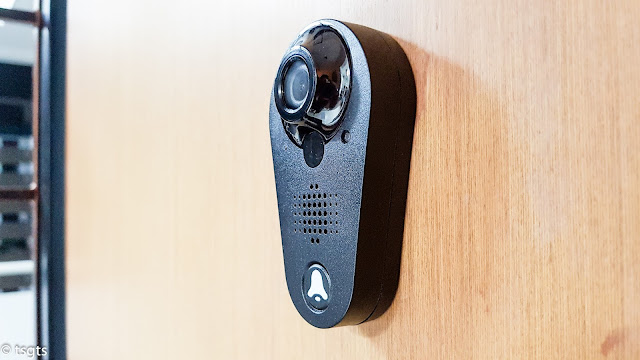 Updated 8th October 2017: Feedback from Brother-in-law, the door viewer works fairly well to capture movements in front of the door, he caught mostly flyer distributors. What will work better is that when the door is not close, no more images should be captured since it is then capturing of movement within the door way, which is not very useful.