The first Wanscam product I reviewed last year left a very good impression. The HW0049 is the latest addition in the HW series. The now-old HW0026 (which is still in service in my collection today after a year on 24/7 duty), is one of the best budget IP cameras I’ve tested […]

The first Wanscam product I reviewed last year left a very good impression.
The HW0049 is the latest addition in the HW series.

The now-old HW0026 (which is still in service in my collection today after a year on 24/7 duty), is one of the best budget IP cameras I’ve tested so far, despite its weird design. As the latest addition to the HW series, the HW0049 retains the same qualities, plus the Pan & Tilt ability. 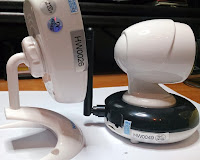 
In the box:
The packaging contains the camera and a full set of accessories: Mounting screws, LAN cable, a 5V/2A power adapter, a CD-ROM and a startup leaflet.Instead of the usual plastic bracket, a round piece of plastic can be inserted into the base of the camera to mount it directly on a wall

Design:
From the picture, I expected a bulky camera but it is in fact smaller than the traditional Pan & Tilt cameras.
It is even more compact than the static HW0026. 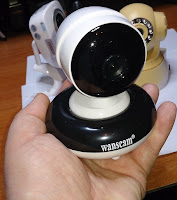 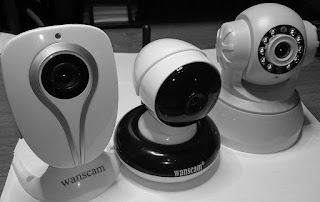 There’s a complete set of connectors at the back: RJ45, DC, audio-in, and audio-out. 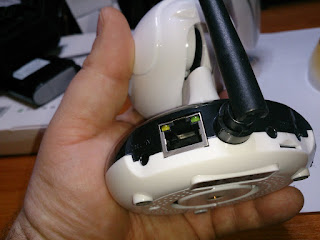 Setting up:
There are several foolproof ways to setup the camera. Everything is covered by the startup manual in the CD-Rom provided. 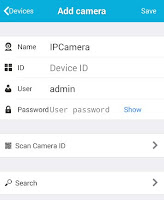 Wireless setup:
When powered on for the first time, the camera operates as a Wi-Fi access point. So it is possible to connect directly to it with E-View7 (Android, iOS) and then configure it to work with your local router .


Ethernet wired setup:
If you start the camera while plugged via Ethernet to your LAN, the IPCameraTool.exe provided on the CD-ROM will locate it. It is then possible to access the Web Interface (default login admin/admin) and configure it from there.

The camera offers 2 user interfaces (3 if you count the PC program but it’s not worth it): The neat smartphone app E-View7 (Android, iOS), and the embedded web interface, which offers some advanced options not found E-View7, like the ports assignment, or the Onvif parameters.

It’s worth noting that the browser interface works in IE with ActiveX, but also in Chrome or Firefox with the Flash Player plug-in (hence the use of the RTMP protocol) .They’re almost on feature par with the exception of motion detection areas, and video masks (to hide some parts of the picture) which require ActiveX (IE).

The recordings on the Micro-SD card can be played back from the web interface via the “Intelligent online playback” http://<ipaddr>/backplay.html (ActiveX only) or downloaded from http://<ipaddr>/sd/

P2P only if you want:
While the HW0049 offers the P2P convenience, it is not a requirement to use the camera fully.
I always forbid that kind of traffic outside my LAN (as much as I can), and also disable the UPnP feature on the camera when possible.
Strangely, this section is now missing from the menu of the current web interface version, but the page can be called directly: http://<ipaddr>/web/upnp_men.html

Update (16/12/2016): I have noticed that, despite that I turned off the UPnP option, the camera is still trying to chat with the outside world; something I don’t see with the older HW0026 (also an older firmware). I’ve set my firewall to drop (and log) any outbound communication attempt from the address pool dedicated to my cameras. While it’s not only used for trojans, the port 32100 has a bad reputation…

The camera uses the cgi instruction set from HiSillicon which SDK is documented in various places. Synology SS7 compatibility:
Like the HW0026 before, the HW0049 connected straight away as an Onvif 2.1 device to my Synology Surveillance Station with audio support, and Pan & Tilt control. 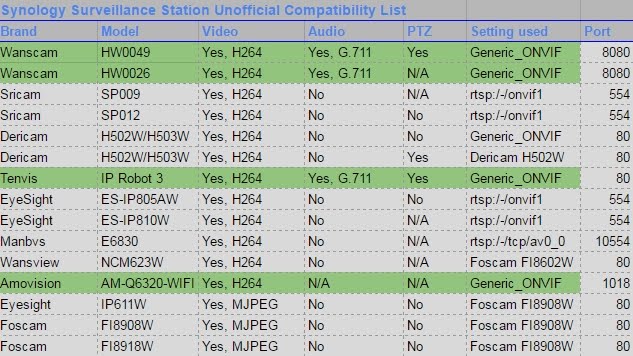 The Hi3518E give the usual sharp and clear picture even in the dark. There’s a ring of tiny but strong IR LED’s around the lens. The Web and mobile interfaces allow the full control of the sensor, including the IR LED mode (auto/on/off). The Wide Dynamic Range (WDR) option allows to boost the brightness, which is particularly useful in situations where the camera cannot use the IR LED (e.g. behind a window) 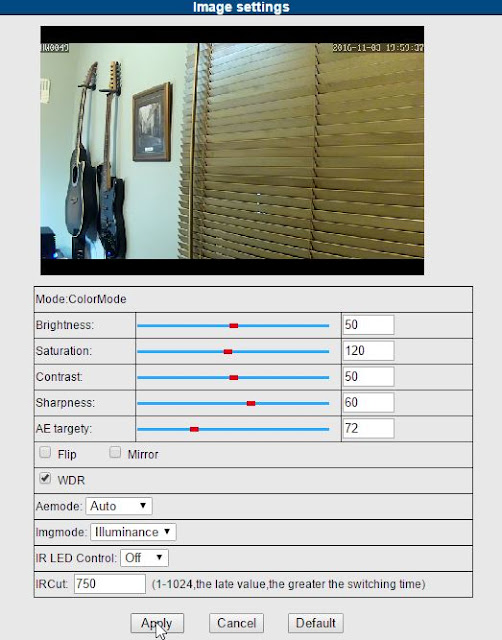 The IR-Cut delay gives some time to the camera to decide that the conditions are met for long enough to switch into night or day mode. However it does not work very well and you may hear the IR Cut switch ticking like an old clock for a few minutes before making up its mind. I managed to make it quieter by maxing out the IRCut value to 1024. 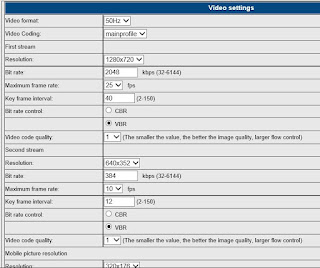 Audio:
The incoming sound from the microphone is clear and interference-free. The speaker is a bit faint and does not sound great due to the plastic casing. As for any cameras with integrated speaker and microphone next to each other, it is prone to acoustic feedback if you use both together. For proper 2-way audio, consider plugging an external speaker.


Conclusion: sehr gut!
The Wanscam HW0049 is a very complete and well designed product.
With the choice of mobile or web interface and a complete Onvif compatibility, it outperforms the rivals in that price category (30.78€/34.23$).


Not so good:
● indecisive IR-Cut switch
● some advanced functions are only available in some interfaces, or simply missing, like UPnP switch. 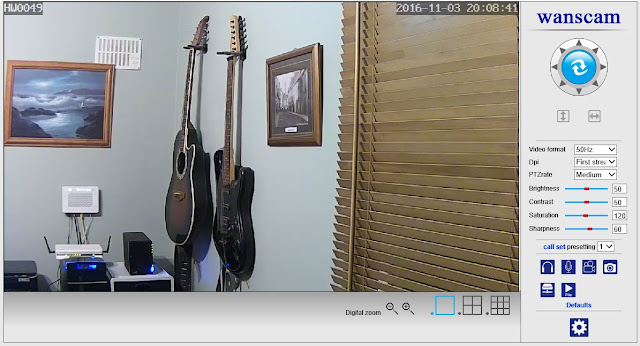 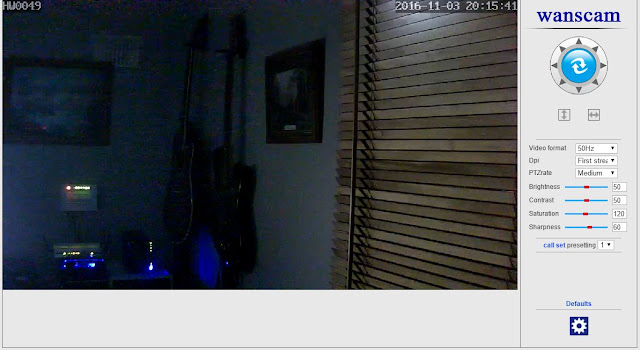 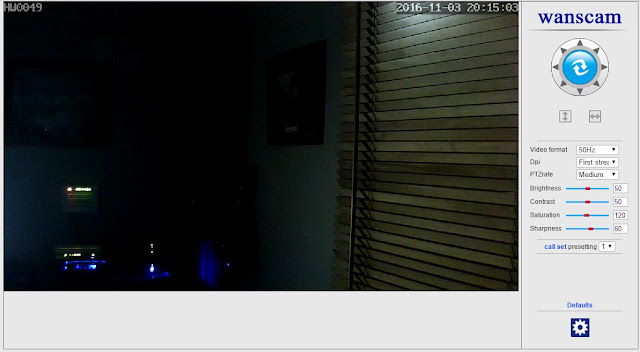 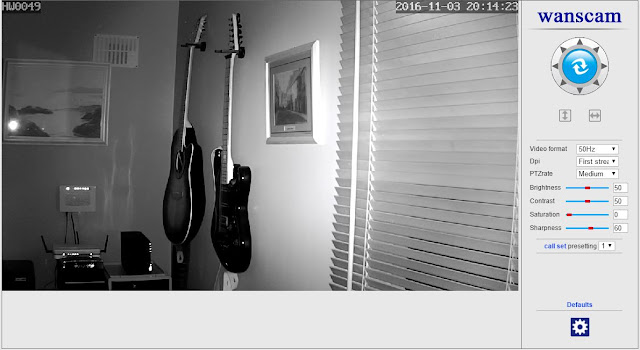